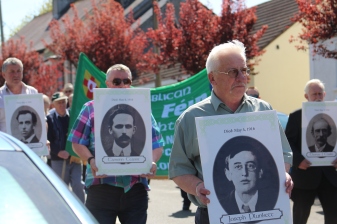 “Republican Sinn Féin members are saddened this evening to learn of the death of a long time and trusted member, Kevin Kavanagh.   Kevin served many years on the organisations Ard Chomhairle, in 2017 he was honored by his comrades in Leinster when he was awarded with the annual CABHAIR testimonial award for the Province.  Kevin had been battling illness in recent times.

Despite this up until he physically no longer could Kevin consistently showed up to events all across the country. In 2016 he was among 12 republicans arrested by the RUC/PSNI simply for commemorating Ireland’s Patriot Dead 100 years on from the Easter Rising.  He was a true republican in every sense of the word.

Faithful to the last, Kevin will be dearly missed and leaves a huge gap to be filled.