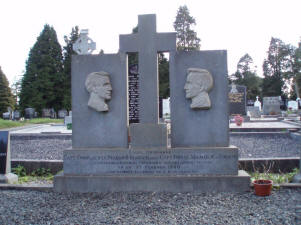 “On March 21, 2016 it was brought to the attention of Republicans in Westmeath the defacement of Peter Barnes and James McCormicks grave in Mullingar.

Republican Sinn Féin national PRO and member of the local Seán MacCoisdealbha / Mairtín Ó hÚrsáin Cumann, Seán Ó Dubhláin had the following to say;  “In the cause of Irish freedom both of these men were heroes, 76 years on from their executions at the hands of the English in Winson Green Prison, Birmingham on Ash Wednesday 7 of February 1940, and 47 years on from their repatriation this disgraceful and cowardly act which resulted in family members spending the day cleaning the memorial proves one thing; that the cause these men died for still echos down the corridors of time and that those who seek to maintain British interests in Ireland still fear that message.”

This vandalism is being treated seriously by Republican Sinn Féin, anyone with information can contact local representatives by e-mailing [midlands@rsf.ie] or by calling 01-872 9747.

“I shall walk out in the morning smiling, as I shall be thinking of God and knowing that I die in a just cause like the good men that went before me in the cause.” – Company Captain, Peter Barnes, I.R.A

“As a soldier of the Irish Republican Army, I am not afraid to die, because I am dying in a just cause. God bless Ireland and the men who have fought and died for her.” – Staff-Captain, James McCormack, I.R.A