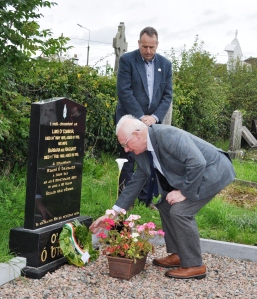 We in Republican Sinn Féin are all very saddened to learn of the death of lifelong Republican, Vol. Seán Scott who passed away on July 1st.

A veteran of the 1950’s Operation Harvest (Resistance Campaign) with the Pearse Column he would reject every subsequent sell out of republican ideals in 1969/70 and 1986 remaining true to the 32 county Irish Republic.

Seán will be reposing at Dempsey’s Funeral Home, Ballyforan, on Tuesday evening from five o’clock until eight o’clock.

Removal from his home on Wednesday morning to St. Joseph’s Church Ballyforan for Funeral Mass at half past eleven. Burial afterwards in Dysart cemetery.
Family flowers only please.