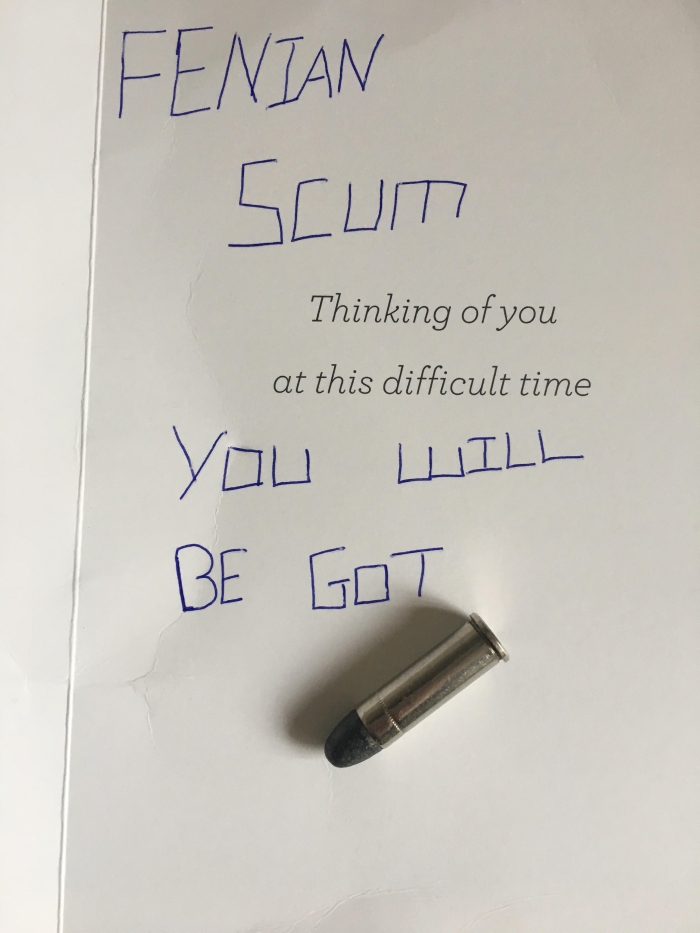 Today we have received very disturbing news from Lurgan. A member of our Thomas Harte cumann there, awoke to an envelope in his letter box. When he opened it, inside, he found a bullet and a message that reads: FENIAN SCUM, YOU WILL BE GOT.

We all suffer the consistent harassment of the state daily, but there has been undue attention focused on a few of our Lurgan activists and in particular the individual who received this despicable threat. He cannot go to the shop for groceries alongside his young family without the RUC/PSNI thugs harassing and threatening him.

So where could this threat have come from. The obvious choice would be mindless loyalist terrorists, who seek to instigate a sectarian reaction. But it is our belief that this threat extends from the local RUC/PSNI militia who undoubtedly are colluding with either loyalists or anti-community forces….in an attempt to silence us and put fear in our hearts.

You have instilled the opposite we have no fear of you parasites and you cannot break or resolve which is steady and unending until we achieve our goal: The Irish Republic.

We at Republican Sinn Fein absolutely and unreservedly condemn these parasites for the threat they issued. We call on our republican comrades to stand with us in the face of these threats and we call on all right thinking people from every sector of the Irish community both republican and unionist to see the state for what it is a puppet master pulling your strings.

‹ Eire Nua: The Protestant/Unionist Community Has Nothing to Fear From Irish Unification
No Respect for the Orange Institutions, Disband the RUC/PSNI ›