Baile › POW: Statements › Internment of Gabriel Mackle is an attack on Human Rights

Internment of Gabriel Mackle is an attack on Human Rights 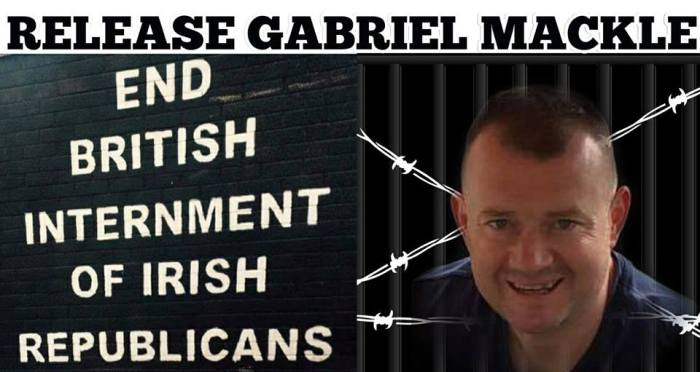 “It is little over a week now since the unlawful kidnapping by the RUC/PSNI of Gabriel Mackle, he remains without charge, without due process and interned for nothing more than being an Irish Republican. On November 9 Gabriel was enjoying a birthday celebration with his partner and children only to be interrupted and kidnapped by the RUC/PSNI conducting their normal British militarist agenda. He was taken in front of his children terrifying them and leaving his partner Joanne distraught. Gabriel is not the first to be interned following a long line of internees such as Martin Corey, Marian Price and more recently Tony Taylor.

The decision to revoke Gabriel’s licence was taken by the British Secretary of State for the Six Counties James Brokenshire, whose office still refuses to accept their responsibility for the decision. It is abominable that a British MP has been responsible for the unlawful imprisonment, internment and mental torture of Republican Prisoners. This is the reality of British rule in Ireland and exposes once again the abnormal nature of the Six-County state.

We would like to extend the gratitude of Gabriel and his family for all the support they have received from the Republican community as a whole. Republican Sinn Féin is calling on human rights organisations to speak out on behalf of Gabriel Mackle and all who are interned by the British state in Ireland because of their political views. By remaining silent it leaves open the possibility of increased repression leading to a point where there is nobody left to protest or articulate a dissenting view. It is not enough to leave injustice to be fought by the just members of our community while you sit on the fence observing, get involved, educate yourself, take up the mantle for a man who can no longer fight injustice but now suffers the full weight of it, end internment release Gabriel Mackle and his comrade Tony Taylor now.”