Easter Statement from the Leadership of the Republican Movement 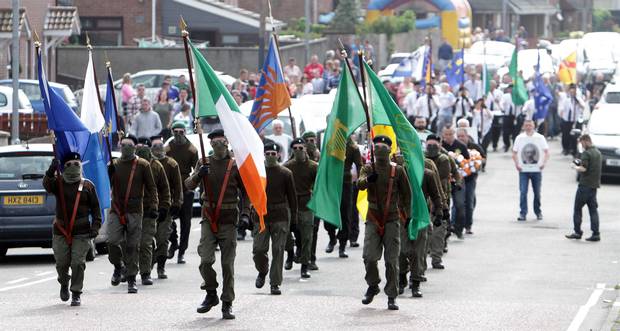 On this the occasion of the 101st anniversary of the 1916 Rising the Leadership of the Republican Movement sends revolutionary greetings to all assembled at the graves and at monuments to the memory of our Republican dead and to celebrate the vision which motivated the men and women of the Irish Volunteers, Cumann na mBan, the Irish Citizen Army and Na Fianna Éireann to take up arms.

We remember too all those who have struggled, lived, and so often died, for an Ireland where the people would be masters of their own destinies. We especially remember our comrades who gave their lives in recent decades, and our comrades who have left us who dedicated their whole lives to the collective struggle to build a radically different and better Ireland.

To all Republican prisoners incarcerated as a result of their faith in and loyalty to the All-Ireland Republic, we applaud your steadfast resolve not to be criminalised by Westminster, its lackeys in Stormont and Leinster House as well as others with anti-Republican agendas. Equally we greet our comrades of Cumann Na mBan, Na Fianna Éireann and Sinn Féin Poblachtach who have remained true to the cause of the Irish Republic as proclaimed on Easter week 1916.

To the soldiers of the IRA we salute your resolve. It is never an easy decision to leave the comfort of home and take up arms against a better-equipped enemy. To do so for the betterment of others is highly commendable. Here today we recommit to supporting you in the just struggle for a Sovereign Independent Socialist Republic. We acknowledge that this struggle will never cease until the goal of 1916 is attained.

For us the struggle of 1916 is not simply a historical act, the 1916 Proclamation is not just a historical document, they are both unfinished actions and unfulfilled desires. We will continue the fight to complete and fulfil the desires of the men and women of 1916.

Last year we had the spectacle of those who sit in Leinster House hold commemorations the length and breadth of Ireland. They had hoped that they could draw a line under the message of 1916 and then consign it to history. How uncomfortable they were was highlighted when they had to ban the ordinary citizens from the main street of Dublin when the truth dawned on them that they could not control the narrative and the message; that 1916 is an unfinished revolution.

In recent years we saw a counter-gang attempt to usurp the name of Sinn Féin Poblachtach and tarnish it with criminal behaviour; we faced that threat down with unity and strong resolve. In recent weeks, we have seen an attack on our POW system by those who would claim to be Republicans; this too will be faced down.

After the so-called peace agreement between the Provisionals and the British establishment we saw attempts to criminalise our POWs through forced integration. The battle to regain separation was a long difficult struggle, our POWs were injured and hospitalised but through dedication and discipline Republican POWs were again housed separately from the general population. Our POWs have been to the fore of all struggles since those days and will continue to resist all attempts to criminalise any of our members as well as POWs of other groups.

There has been a seismic shift in the politics of Ireland and Britain over the past year with the decision by Britain to withdraw from the EU which brings the possibility of a hard border, checkpoints etc. This of course serves to forcefully remind people of the reality of British occupation and gives the lie to those who would pretend that partition has been removed for all practical purposes. Irish Republicans have always opposed the EU as we have recognised it an imperialist and undemocratic institution. We are also fiercely against any further obstacle being put in the way of the political and economic Independence of a 32-County Ireland.

We demand an immediate declaration of withdrawal from the Occupied Six Counties by the British Government. Now more than ever the political and economic future of the Irish people must be made by the people of a free and united Ireland.

A century after 1916 we stand here as Irish Republicans committed to the ideals of Connolly, Pearse, and their comrades of 1916; to the establishment of a new and better Ireland where the working-class exercises economic and political power in a democratic Ireland. That means building the movement of Irish Republicans drawn from the most class-conscious elements of the working-class; it means promoting our message among ever greater numbers of people, in local communities, both urban and rural, workplaces, trade unions, and elsewhere; it means the daily grind of education, agitation and organisation. This is the path to our goal. This is the means to the Irish revolution. They did not sit idly by and just hope for a better Ireland. they set out to make it themselves. We salute their bravery and the bravery of every volunteer since for whom the collective betterment of the masses was of more importance than the individual danger of the individual.

As we go forward we must place on record our vision of a free 32-County Ireland. An Ireland that reflects the ideals of the 1916 Proclamation, cherishing all of the children of the nation equally: “oblivious of the differences carefully fostered by an alien government”. We have the Éire Nua programme, now is the time to bring it to the masses.

A chairde, as we leave today remember the words of the heroic Lord Mayor of Cork Terence Mac Swiney: “If but a few faithful are found they must be all the more steadfast for being but a few”. Redouble your efforts to bring about the day when we are a United Sovereign Democratic Socialist Republic.

Issued by the Leadership of the Republican Movement, Easter 2017