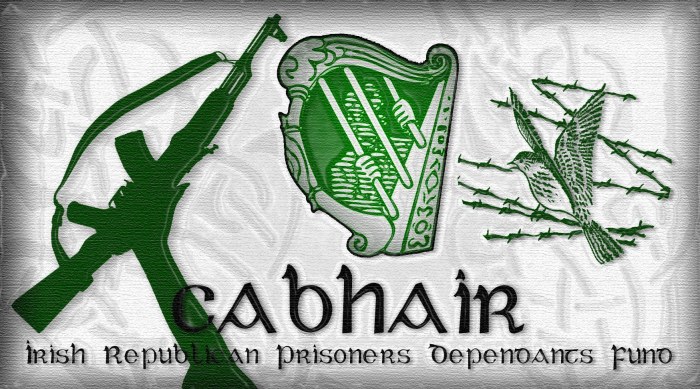 Disturbing news came out to Sinn Féin Poblachtach today of dissent and conflict within Maghaberry prison. An attempt was made to remove a Cabhair POW from Roe house. Gabriel Mackle had only returned from a few days release to celebrate a family occasion when he was approached by some representatives of the IRPWA POWs.

Gabriel was approached last night by three irpwa prisoners who informed him that he was to hand over all legal papers to them as the irpwa wanted to take control of his legal paperwork within the jail and have an Irpwa rep accompany him on legal visits. Gabriel rightly refused to be bullied in this manner, stating he was not an Irpwa POW, that he was a Cabhair-supported prisoner and would work under Cabhair-supported structures as he has been since being incarcerated.

This move comes as no surprise to Sinn Fein Poblachtach. We have learnt over the past number of weeks that outside some members of Irpwa have made approaches to ex POWs in an attempt to recruit them into their organisation, stating that by the end of the year they (IRPWA) will be the only Republican group out there as they are creating the condition for them to in their words “clear the field and that they will not allow any other group to co-exist alongside them”, This is a disgusting move and Sinn Fein Poblachtach would like to send a message to the IRPWA and anyone else who has such ideas. We have been here long before any such groups were formed and will be here long after, We will not be threatened by any organisatio, especially one that has hijacked a movement from its founders.

Gabriel Mackle has the full support of the Republican Movement and we will not allow him to be criminalised by anyone.

The wing in Maghaberry does not belong to the IRPWA. From the first protest in Maghaberry in 2002 the CIRA prisoners were to the forefront of all protests and so was Gabriel during the present phase of the prison struggle. When CIRA POWs had 17 POWs they never victimised any other POWs. In fact Cabhair-supported POWs defended the right of those that were in the minority. It was our view that everyone on the landing were Republican POWs. Unfortunately this goodwill has not been reciprocated when it has come to Gabriel. These threats are coming from the very same group that purport to promote unity, they are showing the Republican people their version of unity but it has to be on their terms. This latest move should not come as any surprise as they have used this same policy not so long ago when they removed Liam Campbell from the wing because he dared challenge certain criminal behavior.

It is not so long since the dirty protest when fellow Cabhair-supported POWs took the lead in that protest and welcomed newly incarcerated POWs. It seems the old saying EATEN BREAD IS SOON FORGOTTEN never rang so true.

To have any Republican POW removed from the wing to face criminalisation or isolation is simply wrong.The threats against Gabriel must be withdrawn, Cabhair-supported POWs will always work under their own structures.

‹ Bus Éireann: All Out Strike
RSF supports Gabriel Mackle in his defence of his Republican identity ›