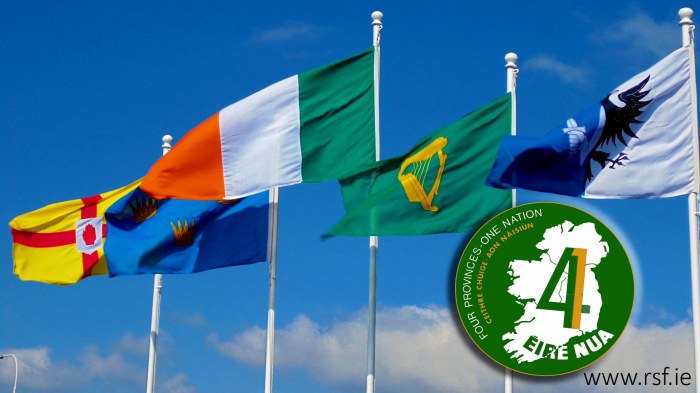 “Aogán Ó Fearghaíl, the 38th President of the Gaelic Athletic Association / Cumann Lúthchleas Gael has made astounding remarks in Dubai to gathered reporters during the GAA All Stars Tour, stating that, “In the future if there are new agreements and new arrangements we’d be open-minded about things like flags and anthems – but not in advance of agreements.”

Citing ‘Brexit’ as creating the dimensions for possible ‘political realignments on the island of Ireland’ he went on to say that he accepted the anthem, Amhrán na bhFiann and the Tri-Colour created more difficulty at home for the unionist community and that the symbols of the nation could be removed from display.

What we have here is an open and assailant agenda by British apologists at attacking the concept of a proud, independent and sovereign Irish nation, such as outlined in the 1916 Proclamation. One hundred years on, with the uncomfortable 1916 Centenary for the Free State ‘out of the way’ we are bound to see a furtherance of this agenda to re-embroil Ireland, the historic nation within the British sphere of thinking.

With far right nationalism growing across Europe it is likely in the next five years we will witness a potential break-up of the European Union, one year ago, mention of Ireland (26 Counties) leaving the EU was unheard of in mainstream media, now it is a regular debate.

So Aogáin Ó Fearghaíl is correct we could see a shift in political re-alignments in Ireland, however at what cost?  The men and women and indeed children who sacrificed so much in 1916 and succeeding years did so in a united Ireland. A united Ireland back under the British crown or in a position of compromised political sovereignty and integrity is not worth anything but a compromise of the nation’s soul and identity embodied in our ancient emblems, national flag and nation’s anthem, abandonment of these are the first acts of surrender.

Our national flag of Green, White and Orange is of the Republican tradition, a tradition founded in Ireland by Protestants and served by men and women of all faiths and none. It is representative of the Republican aspiration to see, “all the children of the nation treated equally”.

We in Republican Sinn Féin deplore and reject these comments by Aogáin Ó Fearghaíl as a rejection of those principles, they are comments which play directly into the hands of the cultural imperial war which has been waged on the People of Ireland for centuries, not least a recognition of the sectarianism partition maintains.

As far as political re-alignments are concerned we place Éire Nua on the table for discussion, which would secure a safe future for all traditions in Ireland in a federal system of self-governance.”