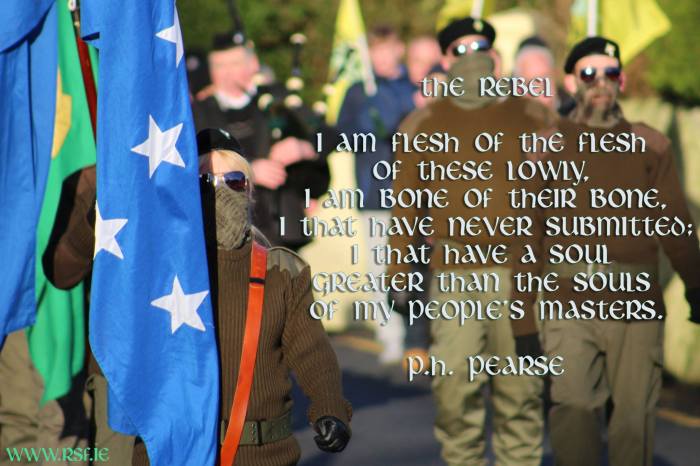 On December 11, 2015 the Seán Keenan Cumann of Republican Sinn Féin Derry City issued the following statement in which their membership stated;

“We will never accept imposition upon our freedom or our liberties. Our freedom is an ancient yearning and is justified by the blood ocean filled by our martyrs and by victims alike.”

“Our freedom will be complete, it will be unconditional and it will be absolute and no one has the right or justification to censor it or demolish it. To do so would be treason even such a word does no justice to those actions, to be forever held in the highest contempt by the free thinking Irish people and suffer the wrath and justice peddled by the brave patriots of this land. Then only by the will of a free people may Ireland regain it’s glorious footing with the other nations of the earth.”

“We should not want for more than what is ours rightfully. We should never approach upon the theatrics of imperialistic actions and remain faithful allies of oppressed people’s.
It has been said before and will be said again, Ireland unfree shall never be in peace.  Continuity not compromise.”

‹ “Deal with reality of the issues tearing apart our city instead of bailing out banks.” [RSF Cork]
1916 Republican Garden in North Lurgan [RSF Armagh] ›