In a statement, published in Friday, April 3, the International Department of Republican Sinn Féin sent solidarity greetings to arrested comrades of the revolutionary left in Turkey. The statement also condemned the arrests and raids by the Turkish police in various Istanbul neighbourhoods. This wave of repression against political activist in Turkey was the State’s response to a series of direct actions and attacks by revolutionary activists in recent days.

Among the premises raided was the cultural centre of Idil, which also serves as the office of the popular political Folk band Grup Yorum. Furthermore, a number of human rights organisations use the premises. On a regular basis, social, cultural, and political events of Istanbul’s revolutionary youth are also held there. 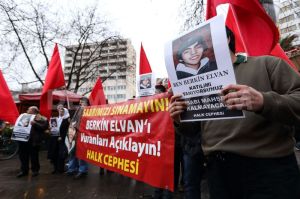 In a statement, the Revolutionary People’s Liberation Front (DHKC) commented that the AKP government tries to revenge the hostage-taking of the prosecutor Mehmet Kiraz who was overseeing the case of murdered Gezi activist Berkin Elvan.

The DHKC said: “It seems that AKP vent their wrath on [the political Folk band] Grup Yorum and other democratic and legal associations. One of the reasons might be the 5th [Grup Yorum] concert for an Independent Turkey [to be held on April 12 in Istanbul]. Last year over 1 million people attended [this political and cultural assembly]. So, they try to avoid [a similar manifestation of left-wing political activism] with raids and arrest.”

At a press conference in the afternoon of April 2, the remaining members of Grup Yorum declared that they will withstand this state repression and continue with preparations for their concert. Furthermore, they demanded justice for murdered political activist Berkin Elvan.

The International Department of Republican Sinn Féin condemns these raids against political activists in Istanbul. It sent, furthermore, greetings of solidarity to left-wing activists in Turkey suffering under repression and harassment in recent days, to the political Folk band Grup Yorum, and all comrades and family members of the arrested activists.

In particular, greetings were sent to Grup Yorum member Cihan Keskek and political

activist Steve Kaczynski. Comrades Cihan and Steve are close friends of the Republican Movement in Ireland. Steve is a regular reader of the republican monthly SAOIRSE. Only some weeks ago, Cihan and Steve met with a representative of Republican Sinn Féin. At every meeting between representatives of Republican Sinn Féin and their political organisation that was attended by them, both showed a deep interest as well as a deep knowledge of the developments in Ireland, in particular the situation of the political prisoners held in Maghaberry jail. At their last meeting in early March, Steve showed great interest in the protest against water charges in Ireland.