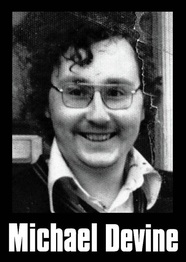 US Army base on the outskirts of Derry City. In 1960 the family moved to the Creggan area of the city. He was educated in the Holy Child primary school and St. Joseph’s Secondary school. Upon leaving school he found employment in Austin’s in the Diamond area of the city.

When the British Army emerged on the streets of Derry in the wake of the battle of the bogside, ‘Free Derry’ was maintained by local people. Michael was among those defending the barricades, with the Creggan becoming a no-go area for Britain’s forces of occupation. In July 1971 he joined the James Connolly Republican Club, and shortly afterwards he joined the Official IRA. The murder of two local residents by the British Army and the re-introduction of internment had resulted in an escalation of the level of resistance to British forces. The barricades at Free Derry were now being manned by armed men.

On January 30th 1972 Michael was among those who attended the peaceful march against injustice in Derry. The massacre which took place had a lasting effect on all who were present, with thirteen innocent people being shot dead by British soldiers and one dying later from his injuries. Reflecting on what became known thereafter as Bloody Sunday, Michael wrote: “I will never forget standing in the Creggan chapel staring at the brown wooden boxes. We mourned, and Ireland mourned with us. That sight more than anything convinced me that there will never be peace in Ireland while Britain remains.” Michael’s words summed up the thoughts of many at the time.

In 1974 Mickey left the Stickies and joined the the newly formed Irish Republican Socialist Party, being a founding member of that organisation in Derry. He also joined the military wing of the IRSP, the INLA. On September 20th 1976 he was arrested after an arms raid in Lifford, County Donegal. After being held and interrogated for three days in Strand Road barracks in Derry City, he was sent to Crumlin Road Jail where he spent nine months on remand. He was sentenced to twelve years imprisonment that July, and upon arriving in the H-Blocks he immediately joined the blanket protest. He became O/C of the INLA prisoners when Patsy O’Hara joined the hunger strike.

On June 22nd 1981, Mickey joined the hunger strike. 60 days later, Mickey died on the same day that Owen Carron was elected by the people of Fermanagh/South Tyrone to succeed Bobby Sands as their MP. The election of Sands and Carron demonstrated the clear support of the people for the demands of the prisoners- political status. Mickey was the last prisoner to die on the hunger strike, the tenth in all and the third INLA volunteer to die. He was 27 years old.