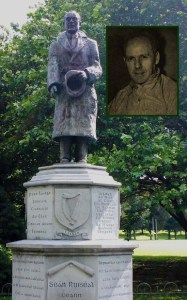 The call, made by the head of the unelected 26-County Administration, Leo Varadkar, for the removal of the statue of the Irish patriot Sean Russell in Fairview Park in Dublin, is a display of historical illiteracy. This should be seen for what it is, another opportunity to put the boot into Irish Republicanism and to deflect from the very real fascist history of his own Fine Gael party. When Leo Varadkar bandies about words like collaborator in reference to Sean Russell, again he should look to his own political antecedents. It was they who used borrowed British guns and soldiers to attack their former comrades, including Sean Russell who had remained faithful to the All-Ireland Republic of Easter Week. Has Leo Varadkar forgotten Eoin O Duffy and the Blueshirts, and their fascist salute when “…they sailed beneath the swastika to Spain” from Dun Laoghaire to fight for the fascist Franco against the Republicans?.

The recent attempt by his administration to commemorate the Black and Tans, abandoned in the face of overwhelming public opposition, tells us all we need to know about the anti-republican agenda of this administration. Having failed in that particularly shameful event, they are now are turning their attention to the monuments of our patriot dead. Already the home of 1916 hero Michael ‘The’ O’Rahilly in Dublin is scheduled for demolition to make way for apartments. The Leinster House political elite clearly do not place a value on our history. Instead they seek to erase its physical traces
If Leo Varadkar was truly concerned about racism in Ireland and the plight of the most vulnerable he would close the Direct Provision centres. In the midst of the most deadly pandemic in a century, Leo Varadkar’s government instead crammed people into these centres without any meaningful provision for their health and safety or the communities in which these centres were located.

Sean Russell, born in Fairview in 1893, was a veteran of the 1916 Rising, a member of the GHQ Staff of the IRA throughout the Tan and Civil War period. In the 1930s he was elected Chief of Staff. To understand Sean Russell you must first grasp the fact that he was a Fenian separatist and all that implies. One can argue about the political naivety of his actions. In 1926. Sean Russell, along with Gerry Boland, traveled to the Soviet Union on an arms-buying mission. This did not make him a communist no more than his later presence in Germany made him a fascist.

Russell was a soldier and his objective was the freedom of Ireland. For him the nuances of ideology were for the politicians. Russell looked at his missions to the Soviet Union and Germany through the prism of Irish history. He saw himself following in the footsteps of Casement in 1916 or Tone and Emmet in the 1790s. All sought aid from states at war or hostile to England. For Russell, the adage of ‘England’s difficulty is Ireland’s opportunity’ was no mere historical slogan, but rather a programme of action. This view of Russell is shared by a number of leading historians on this period. Russell famously told one German official: “I am not a Nazi. I’m not even pro-German. I am an Irishman fighting for the independence of Ireland.” He made it clear that any military aid could not have any strings attached.

The historical ignorance of those who seek to foist ideological labels on Russell is encapsulated in the various attacks that have been made on his statue in the past, Both the far right and far left have, at various times, vandalised the statue, labelling Russell alternatively communist and fascist. Russell was neither a fascist nor a communist, he was a Fenian. Those from the right and the left who took it upon themselves to attack his statue are united by the same historical illiteracy and failure, or refusal to understand the Fenian tradition of which Russell was an exemplar.

When Russell died in the arms of his comrade Frank Ryan, who himself had fought fascism in Spain, he died an unrepentant Fenian. Irish Republicans will not be found wanting in actively opposing any attempt to remove the statue of Sean Russell or that of any of our patriot dead.