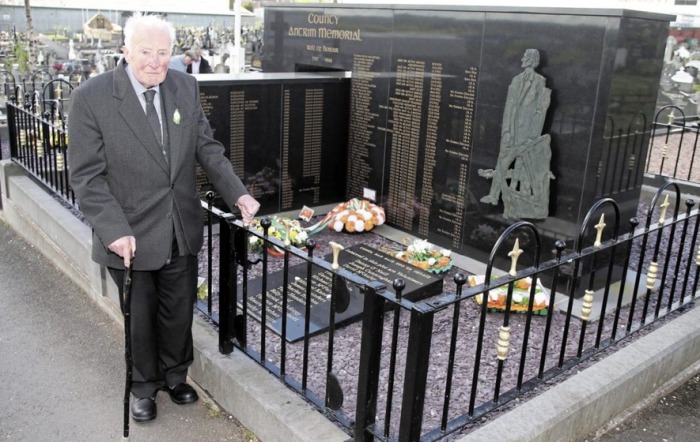 Republicans throughout Ireland were deeply saddened to learn of the death on June 12 of Veteran Belfast Republican Billy McKee at the age of 98.

Billy McKee was born in Belfast in 1921 and joined Na Fianna Éireann in 1936. He was first arrested by British Crown Forces in 1938 for membership of that organisation. On his release he joined Óglaigh na Eireann (the Irish Republican Army).

In 1940 he was again arrested and spent a seven-year sentence in ‘A’ Wing of Crumlin Road Jail. He was not released until 1946. During the Resistance Campaign of 1956-62 he was interned in 1947 and spent three-and-a-half years in Crumlin Road with his fellow internees in ‘D’ Wing.

In August 1969 Billy McKee took over the defence of the Clonard area of Belfast which was under constant attack at the time by the B-Specials, RUC and loyalist mobs.

During the split in the Republican Movement later that year he remained on the Republican path and gave his allegiance to the All-Ireland Republic proclaimed in 1916 and established by the First Dáil Éireann in 1919. He led the opposition to the reformist ‘Stickies’ in Belfast and in 1970 he was appointed OC of the IRA in the city.

He reorganised the IRA in Belfast and under his leadership three Battalions were formed into a Brigade there for the first time since 1921. The Belfast Brigade (which included over 1,000 Volunteers early in 1971) was described at the time as the “scourge of the British army”.

On the night of June 27, 1970 he was seriously wounded while leading the IRA defence of St Matthew’s Church in the isolated Short Strand area in east Belfast which was attacked by loyalists while Crown Forces looked on.

The battle began at about 10pm and continued for the next five hours. Loyalists began attacking the church and surrounding property with petrol bombs. A nearby nationalist pub was also looted and burnt.

A small group of IRA members and members of the Citizens’ Defence Committee took up positions in the church grounds and in adjoining streets. The IRA members were armed with M1 carbines and were led by Billy McKee, commander of the IRA’s Belfast Brigade.

The loyalists withdrew after about five hours, as dawn broke. IRA leader Billy McKee stated that his unit had fired 800 rounds during the battle.

Major-General Farrar-Hockley, then British commander of Land Forces in the Occupied Six Counties, named Billy McKee among the five leading IRA members in Belfast. Two months later an undercover British army unit holed up in the Lower Falls arrested Billy and he was brought to court on an arms charge. He refused to recognise the court and was sentenced to five years in jail.

In Long Kesh Billy was elected OC of the sentenced prisoners and led the successful 1972 hunger strike which forced the British to concede political status to the Republican prisoners. “Special Category Status” as the British termed it, lasted until 1976 when its withdrawal triggered the blanket protest which eventually culminated in the 1981 hunger strike in which 10 Volunteers died.

Released in 1974 Billy became OC of Belfast again until 1977. He took part in secret peace talks involving the British government in Derry and in County Clare alongside Sinn Féin leader Ruairí Ó Brádaigh.

A faction led by Adams managed to get McKee voted off the IRA Army Council, effectively forcing him out of the leadership of the organisation.

In November 1986 when the Sinn Féin Ard-Fheis voted to recognise the 26-County State, Billy McKee joined the delegates and visitors who left the Mansion House, Dublin. He attended the first press conference of the reorganising Republican Sinn Féin later that evening in the West County Hotel.

In 1993 he was the Honoree at the annual CABHAIR (Irish Republican Prisoners’ Dependants Fund) Testimonial Dinner.

Billy McKee believed strongly in the abstentionist policy of the Republican Movement. Throughout his life he remained an advocate of armed struggle.
Speaking later in life Billy said he had no regrets about his IRA past.

“From I was 15 until 65 I was in some way involved. I have had plenty of time since to think if I was right or I was wrong. I regret nothing.”