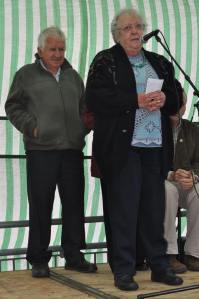 Republicans were saddened to learn of the passing of Ann O’Neill over the Easter period.

Ann was from Ballyshannon in County Donegal, she passed away on the 22nd of March.  Faithful to the 32 County Republic of 1916 all her life she rejected the compromises that diverted some republicans into the partitionist systems in Leinster House and Stormont.

Ann was a member of the 1981 H-Block Hunger Strike Commemoration Committee – Bundoran/Ballyshannon and chaired the annual Hunger Strike Parade in Bundoran in the years after her late brother Joe O’Neill.  Ann always had an open door for Republicans in her Ballyshannon home and will be greatly missed by all her comrades, family and those who knew her.

May She Rest In Peace

Reposing at her late residence on Tuesday between 4pm and 9pm. Funeral Mass on Wednesday at 12 noon at St. Joseph’s Church, the Rock, Ballyshannon with burial afterwards at the adjoining cemetery. House private on the morning of the funeral. Family flowers only, donations if desired to The Sheil Hospital Patient Comfort Fund or Sligo Hospital Oncology Unit.