Brexit: No Peace without Justice in Ireland

“The 1998 Belfast Agreement, commonly known as the Good Friday Agreement’ unsurprisingly now hangs in the balance following the Democratic Unionist Party entering into a coalition Government in order to prop up the Conservative Party and its plans to exit the European Union.

Back in 1997/98 Sinn Féin Poblachtach stood alone as the only political organisation in Ireland opposing this inherently failed, tribalist, sectarian and un-republican so-called peace plan brokered by US imperialists.  As history has shown, there can be no peace without justice.

For us in Ireland the undemocratic nature of the UK is a reality we have had to endure and struggle against as a People since 1801.

The people living under occupation in Ireland’s north-eastern counties did not vote for Brexit, nor did the People of Scotland.

For those who were content to live in this supposed United Kingdom, Brexit has exposed the inherently undemocratic nature of England’s Westminster to a people who’ for a large part in the past could ignore bigoted, racist and sectarian organisations such as the DUP, once they stayed over in Ireland.  Now it seems, the chickens have come home to roost, but at what cost?  As much as the DUP wants to be England’s yes man, the people of England do not want them, they consider the DUP Irish, and they should just stay in Ireland.  This is a reality the DUP choose to ignore.

Nicola Sturgeon has today declared she is postponing plans for a second independence referendum until the end of the Brexit negotiations, it is a strategic move, indeed the timing could be just right and land Scotland in a strong position to vote Yes to Independence, the Scottish vote to remain in the EU was 62%, a significant tally. Whilst we view the EU in the same light as the UK and would warn the Scots of swapping one imperial power for another, however they are now in a strong position to work towards Independence.  The incompetence of Teresa May to date and now aided by her new ally Arlene Foster will surely only strengthen common sense to reign in Scotland towards the eventual goal of Independence.  The DUP can have their heyday today, it could well be their last. 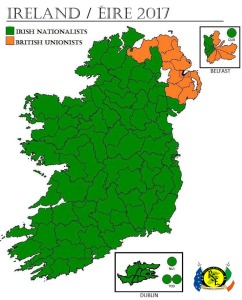 In Ireland, we too want our Independence.  The political landscape in Ireland is rapidly changing, the unanswered questions surrounding the border of partition and how it will be managed add to the current uncertain climate.  In the midst of all the talk, speculation and sheer political incompetency there seems to be no real plan for the future.

Provisional Sinn Féin’s  diversion of a once revolutionary movement, down the path of constitutionalism is quickly ending, discredited and in tatters.  Their next move will be most interesting.  In the short term, even the soft approach of a border poll will not be granted.  In the long term the only option they have of securing a united Ireland is at best a two state federal solution, this in itself will be to appease a tiny pro-British minority.  A united Ireland does not in itself guarantee Independence.  In 1916 Ireland was united, the objective then and now is to rid Ireland of British imperialism.

Today those of a Unionist persuasion in Ireland need to realize that Ireland’s future strength and prosperity rests only in a united nation that is brave enough to make its own decisions working cooperatively with other sovereign nations.  The lack of justice in dealing with the legacy of colonisation in Ireland will never see a guarantor of peace as long as Westminster is involved in the manipulation of Irish affairs.  This is a lesson the DUP knows full well, but as of yet is to stubborn to address as they cling tightly to a dying beast that is the United Kingdom.

While currently the Irish nationalist vote would indicate a United Ireland is within the grasp of a coming generation, moves from those who have kept the Revolutionary Republican flame alive must be geared with an eye on outcomes.  In the medium term a National Constituent Assembly must be set up in Ireland to determine its future, in the short term Republicans and other interested parties should endeavor to cooperate on a Consultative Assembly for discussion on the Ireland we want.

We in Sinn Féin Poblachtach place the four Province Federal Solution of ÉIRE NUA on the table for discussion and debate.  As far back as the 1970’s Loyalists entertained this concept in the eventuality of a British withdrawal.  It is a fair proposal, realistic it its structures for governance and with a firm eye on justice to correct centuries of wrong, it will be the guarantor of Peace in Ireland.

‹ For the attention of our Social Media Followers.
RSF Complete ‘To Hell & Back” in aid of Comrade ›