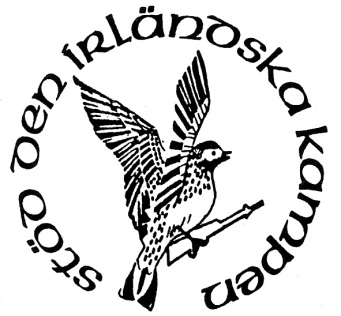 This year we celebrated the centenary of the Easter Rising. The Ireland Information Group celebrated this event with you by taking part of the commemorations. Our solidarity with the Irish freedom struggle stands strong.

The Easter Rising was a revolutionary uprising against the colonial power that had enslaved Ireland for so long, it was also, as it is written in the Proclamation, a revolt against the culture of prejudice and bigotry that went hand in hand with colonialism. In that it followed Tone´s words about uniting all Irishmen against the common enemy. But both the struggle for national freedom as well as against the bigotry was betrayed by the gombeen-men of the Irish bourgeoisie. Since then it came on the brave men and women of the Republican Movement to change these things. To fight for the national freedom, against the brits, against the foreign capitalists who exploit Ireland’s workers and natural resources. To fight against the sell-outs of the bourgeoisie who secure wealth for themselves why the people suffer. We have seen this accelerating the last years.

During these years we have seen “the risen people” stand up against the ruling aristocracy, how the political landscape in Ireland has changed. In the struggle people learn who is friend, who is enemy. This anger we have seen in the streets around Ireland can only strengthen the ongoing struggle for liberation. As is said by one great thinker of the East: There is a great disorder beneath heaven, the situation is excellent.

The Ireland Information group assembled for its annual Congress salutes the people of Ireland in the struggle against the oppressors, foreign or domestic!

We salute our brave comrades in the freedom struggle!

We salute our heroic comrades in prison for their steadfast commitment to the fight!

‹ Independence of Irish people is the goal of republicanism
Atlantic: Ireland’s Marine Resources ›