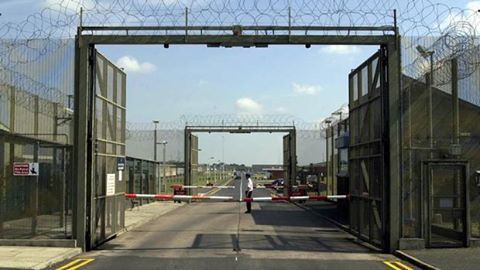 Republican Sinn Féin POW Department has condemned the ‘dirty tricks’ employed by the regime in Maghaberry jail, Co Antrim to prevent a POW receiving visits in the future and the banning of family and friends from visiting the jail.

“Intimidation against the families of Republican POWs in Maghaberry jail, Co Antrim is nothing new but took a more sinister twist at the end of October 2016 when the wife of one Republican POW was physically assaulted by a female screw while on a visit to her husband.

Upon seeing this Maitiú O’ Donnell, a member of Republican Sinn Féin from Derry, stepped in and voiced his defense of the Republican prisoners’ wife. This woman who had their severely disabled child with her, was simply attending him, when she was verbally abused about leaving a tray at the table. The female screw was actually shouting and roaring, an argument ensued and the screw took their names.

“On November 1, 2016 everyone who was present at the time of the assault received a letter and was told that they are now banned from visiting any Republican prisoner in any jail in the North of Ireland (sic). This will undoubtedly have an impact on the young family of the prisoner who has now been told he will no longer be receiving visits from anyone. This is another dirty trick in a long list of tactics employed by the screws to undermine the political status of our prisoners of war, unable to break the men they are now upping their game and attacking prisoners’ families”.