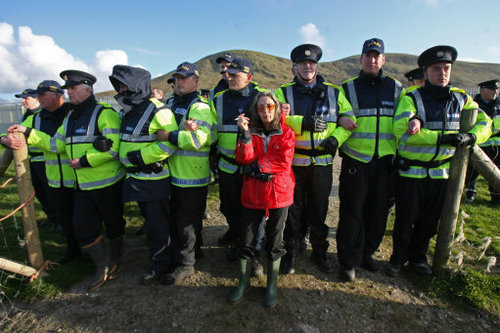 In a statement issued on May 6, 2016 Sinn Féin Poblachtach National PRO Seán Ó Dubhláin condemned the arrest and imprisonment of Maire Harrington, the ‘Shell to Sea’ activist who for years has campaigned against the theft and destruction of Irish resources.  She is expected to spend at least 10 days in Mountjoy Prison for non payment of a fine.

“This arrest is endemic of wider state corruption across the 26 Counties.  Rather than listen to the concerns of a well respected community activist the political police of the Free State instead attack and oppress them communities.  Maire has been to the forefront for many years in the fight against Shell and the laying of the gas pipeline in Corrib, Mayo.

“This is not the first time Maire has been imprisoned for her beliefs.  She is a political prisoner, we call for her immediate release and an end to the senseless short term imprisonment and crimialisation of people in Irish society for minor issues such as non payment of small fines, TV licence etc.”

“What has been occurring in Mayo since the discovery of oil and gas in 1996 is on par with every great act of exploitation and thievery in the world fully aided by a corrupt capitalist/imperialist creed in Leinster House who have sold out Irish resources and sold out Irish communities to the highest bidder.  With  Royal Dutch Shell owning a 45% stake, Statoil, 36.5% and the Vermilion Energy Trust, 18.5% it must be said apart from being screwed what are the Irish people getting?”

“Sinn Féin Poblahtach call for the immediate release of Maire who is made a political prisoner simply for having the courage to stand up for the interests and safety of her community.”