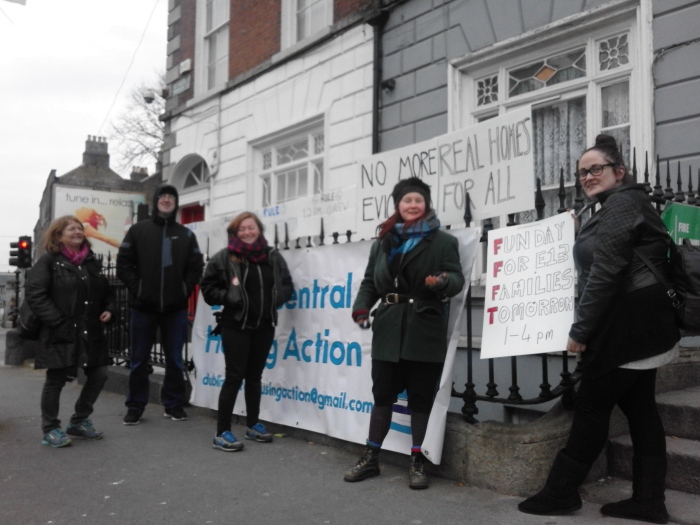 On Saturday 27 of February, 2016 the day the 26 County General Election votes were being counted, an RSF representative met with some of those gathered outside 54/55 Mountjoy Street where the four remaining families had gathered to protest at the unfair treatment they have faced at the hands of Dublin City Council. The Landlord decided to put the price of rent up which is paid by Dublin City Council. DCC claim they cannot pay and have issued an eviction notice to remove the families yet they refuse to negotiate with the families. The thirteen families there in the beginning are now down to four families, with small children involved.

Among the places where DCC wanted to re-home these families was the Regency Hotel, center of a recent criminal feud in which one man was shot dead. As homeless families they have no rights or protections under Tenants’ Rights Law, to date DCC has refused to negotiate with the families who have three demands;

1) We are allowed to stay in 54/55 Mountjoy Street or are properly and securely housed with full tenants’ rights in alternative accommodation, suitable for children.

2) That DCC and Management go into talks with us collectively as a campaign.

3) All people are granted adequate and protected housing rights, tenancy protection and the safety of a home.

This situation faced by the families in 54/55 Mountjoy Street is endemic of the wider homeless problem which has sprung up in Dublin and ignored by the political elite. We believe it is and should be a fundamental right of all the people of Ireland to have a home, to quote from SAOL NUA, the socio-economic policy of RSF;

“Every person is entitled to have his or her inherent human dignity respected and every citizen should be able to enjoy freedom from poverty or insecurity and to have access to a fair and adequate share of the nation’s wealth. All citizens should be equal before the law and all have the duty and the right to contribute by work to their own welfare and the welfare of society. “

As long as the present system of thinly regulated capitalism exists; Ireland will remain divided, Ireland’s wealth will remain in the hands of a tiny minority dancing to the tune of multinational and international financiers and the people of Ireland will pay the biggest price.  Here we have a case once more in Ireland of wealthy landlords making life a misery for those unfortunate to be caught in the inevitable poverty trap of capitalism, and politicians primarily concerned about there own overpaid jobs doing little to help.