In memory of the 1981 H-Block hunger strike. 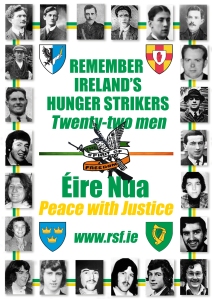 The 1981 hunger strike was and remains to this day a painful and emotional time for Irish Republicans, and especially for us, Republican POWs, within the confines of Maghaberry jail today, where day and daily we face down British occupation in Ireland and confront the restrictive regime imposed on Irish Republican Prisoners of War.

In tribute to our comrades, who even while imprisoned struggled to the death for freedom, justice and the 5 demands, Cogús Republican Political Prisoners along with CIRA POWs, Roe 3, Maghaberry jail will honour and remember the sacrifice, the discipline, the pain and the families of those ten brave revolutionaries.

Then ten vigils will begin on the 5th May and end on August 20th, culminating in a comprehensive and constructive debate by POWs within Roe 3, of the history of the use of hunger strike protest in Ireland.

To the families of the hunger strikers we send you our deepest sympathies as you remember your loves ones.