No cooperation with British Forces of Occupation 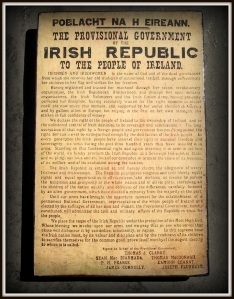 The statement read: “Contrary to myths spread in public over the recent days, the status quo remains the same. This status quo was and is that no member of the Thomas Harte Cumann has any intention to cooperate with the British Occupation Forces in any way. Republican Sinn Féin is determined to resist British Rule at all times and by all means necessary. One of the main areas of this resistance to British Rule in Ireland is on the streets of Ireland.

“In previous years, dozens of Irish nationalists and Republican activists were charged for attending marches in support of then-internee Martin Corey and Easter Parades organised by Republican Sinn Féin in Lurgan. These were attempts to break the Republican spirit of Lurgan and drive Irish people opposed to British Rule in Ireland off the streets of Ireland.

“Lead by a masked Colour Party, hundreds of supporters from all over North Armagh, other parts of Ireland, and from abroad marched together with two Flute Bands, one travelling to the Parade from as far as Scotland. Sunday papers carried this parade on their front pages. This parade sent a clear and revolutionary message across Ireland and abroad: The Republican Movement is alive and well in the Occupied Six Counties; the British Forces of Occupation will not succeed in driving Irish people off the streets of Ireland. Republican Sinn Féin in North Armagh and the Thomas Harte Cumann will resist any attempts by the British Forces of Occupation to criminalise those marching on the streets of Ireland.

“Our aim for the coming two years is to build the Republican Movement in the North Armagh area and organise a large and successful Easter Parade marching through the streets of Lurgan on the Centenary of the Easter Rising in 2016.