Statement by the International Bureau of Republican Sinn Féin 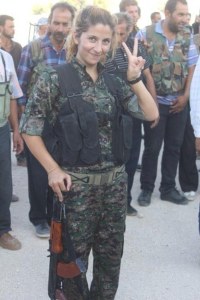 In a statement, the International PRO of Republican Sinn Féin saluted the defenders of the Syrian-Kurdish city of Kobane while at the same time condemning the ongoing military intervention of imperialist powers led by the USA and Britain in Syria and the wider Middle East.

The men and women of the people’s protection units (YPG) defending the city and also the other autonomously governed Kurdish cantons in Syria against the onslaught and siege of the barbaric reactionary forces of the so-called Islamic State in Iraq and Syria (ISIS) are defending one of the very few areas in Syria were all people regardless of ethnicity and religious beliefs can live in relative safety. That and the emerging democratic structures and progressive politics in those areas must be defended against an enemy that openly declares its intention of ethnic cleansing, slavery and genocide.

We therefore urge all members and supporters of the Republican movement to support the defenders of Kobane and declare our solidarity.

At the same time, we condemn the ongoing military intervention of the US, Britain, Turkey and other NATO states in Syria, Iraq and the entire Middle East. While they try to present themselves to the world as the saviours of Kobane, the truth is that their imperialist policies and machinations are among the root causes of the current crisis and have harmed the region of its people for almost a century.

Around the same time Britain partitioned Ireland after the treaty of surrender, it – along with France – partitioned the Ottoman state and arbitrarily drew borders throughout the region, crushing with brute reactionary force the emerging Arab and Kurdish national movements. Since that time, imperialist powers have propped up dictators and overthrown or undermined elected governments as it suited their strategic and economic interests. Their current assurances of a limited intervention in Syria and Iraq are therefore not credible. Had it been in their interest to help the defenders of Kobane, they could have opened the border to Kurdish volunteers from Turkey long ago, or provided them with weapons and ammunition enabling them to defend themselves. But that would not have served their interests or that of NATO partner Turkey. The current show of airstrikes against ISIS targets in Iraq and Syria is far less effective militarily but enables them to exert pressure on local forces to accommodate their interests. The recent deployment of Peshmerga forces from Iraqi Kurdistan must be seen in this context.

We as Irish republicans reject imperialism everywhere and in all its forms, as we reject racism and sectarianism, which are tools of imperialist rule. Peace cannot come to Syrian and Iraq, or any part of the Middle East, until foreign military forces are withdrawn and the meddling of outside powers ceases. The legitimate demand for Kurdish self-determination must be met, 90 years after the partition of Kurdistan. Whether this takes the shape of a Kurdish state or other forms of political organisation such as democratic confederalism is for the Kurdish people to decide.