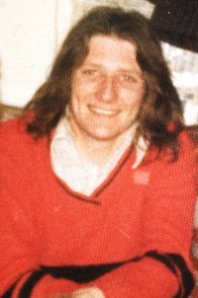 On May 3rd Republican Sinn Féin Átha Cliath held the annual Bobby Sands commemoration outside the GPO.  A full report will be carried in the May edition of SAOIRSE:  Irish Freedom.  The main oration was delivered by Sinn Féin Poblachtach Ard Chomhairle member Seán Ó Dubhláin, Iarmhí, who said;

“The events of recent days, the arrest of Bobby Sands one time comrade, Provisional leader Gerry Adams, should serve as a wake-up call to those who have allowed themselves to be led down the cul-de-sac of reformist politics. Republican Sinn Féin has for years warned that fundamentally nothing has changed, and nothing has.

The British have now shown the Provo’s their true sentiment in this country. I think I can safely say on behalf of the true republican community that we have no sympathy for them and no sympathy for Adams. 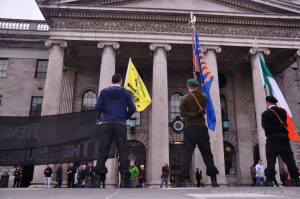 Every week in republican heartlands in the occupied six counties, republicans and Republican Sinn Féin members deal with the reality of British policing.

All the tools of an Orwellian police state are at play. MI5 agents trolling through nationalist areas, targeting people with bribes, harassing and trying to intimidate ordinary people, simply because they believe, England has no right in Ireland and never has.

The Special Reconnaissance Regiment is on the ground and active, they tell us the British

military are not on Irish streets, that the 5,000 backing up British rule in Ireland are reduced to their barracks’ but they must think we are blind, or are at least hoping we are colour blind. British military jeeps in a trend set since the imperial G8 summit last July has seen them paint the jeeps white to blend in with PSNI land rovers.

In the weeks prior to Easter, republicans in Lurgan had homes raided, one home belonging to a member of Republican Sinn Féin was ransacked top to bottom, a search warrant was signed, “military on behalf of PSNI” – that was the description.
In that particular set of raids property and uniforms were stolen belonging to the republican colour party. The Brits failed, but the silence from the now vocal provisional’s on this and many others issues regarding so-called British policing in Ireland says it all. Republican Sinn Féin member Martin Corey spent four years interned on the whim of MI5 without trial of any justifiable reason and not a word from agent Martin McGuinness who is so vocal now Gerry Adams has been lifted. To Gerry Adams we say, you reap what you sow, and it was you who ensured the continuance of this policing in Ireland. All for a peace built on sand.

Enough said about traitors to the Republic.

Having been driven along with his family and many others out of Rathcoole by hate filled Loyalist mops, Bobby joined the I.R.A in 1972 when he moved to Twinbrook, a Catholic slum in West Belfast.

“My life now centred around sleepless nights and stand-bys dodging the Brits and calming nerves to go out on operations. But the people stood by us. The people not only opened the doors of their homes to lend us a hand but they opened their hearts to us. I learned that without the people we could not survive and I knew that I owed them everything.” – Bobby Sands

Hardly off the ground in his republican career he was arrested charged with possession of four handguns and given five years in the Kesh where he served three.

During this time Bobby spent his time studying and learning, he thought himself the ancient language of Ireland, Gaeilge and he was to teach our language to many comrades in years to come whilst on the Blanket and Dirty Protests. He had a marvellous mind and impeccable memory.

It is worth mentioning only last month Republican Sinn Féin’s National Treasurer was arrested for speaking Irish by the PSNI in County Derry.

In the days after coming out of the Kesh Bobby had a busy number of months working as a revolutionary local political activist and Army Volunteer.

He was an organiser supreme in the cause of Irish freedom, taking a small but dedicated few in the Twinbrook estate and turning them into a credible revolutionary body over time by directly engaging with the people with real community spirit. The work Bobby done in Twinbrook in them days is the kind of local community spirit we envision in Éire Nua, empowerment of the people.

We seek the creation of a society in Ireland with new political infrastructure and real democracy, where the people can participate at a community level, this federal plan which ought to be very appealing particularly to those in the West of Ireland and those in the North East of a current Unionist mindset would see new doors opened for progress in terms of social, economic, environmental and cultural issues.

To quote Saol Nua, the Republican Sinn Féin socio-economic policy document;
“New structures in a free Ireland would not of themselves bring about a just social and economic order, but they would make it possible to introduce progressive policies which would lead to the social, cultural and economic emancipation of all the Irish people.”

This was right in line with Bobby’s political thinking and I quote;
“There can never be peace in Ireland until the foreign, oppressive British presence in removed, leaving all the Irish people as a unit to control their own destinies as a sovereign people free in mind and body, separate and distinct physically, culturally and economically.”

The fruits of a New Ireland however were not to be a reality in Bobby’s time, captured on active service in 1976 within six months of his release from Long Kesh Bobby found himself back in the mercy of the enemy.  When captured Bobby and his comrades were taken to Castlereagh where they were subjected to brutal torture and beatings by the RUC. During interrogation Bobby refused to answer any questions. In 1980 Bobby wrote a poem detailing the interrogation, titled “The Crime of Castlereagh”.

The policy of ulsterisation, criminalisation and normalisation was in full swing and this time when Bobby was sentenced there was no political status. Republican POWs then as today refused to be criminalised and as a result refused to wear prison uniforms, Bobby went on the Blanket and so began the harsh existence that was to lead to him and other volunteers to the dirty protest and inevitably on Hunger Strike for the five demands, which were;

1. the right not to wear a prison uniform;
2. the right not to do prison work;
3. the right of free association with other prisoners, and to organise educational and recreational pursuits;
4. the right to one visit, one letter and one parcel per week;
5. full restoration of remission lost through the protest.

Bobby Sands led what was the second hunger strike, it began in 1981, determined to see it through to the end, at 27 years of age he died after 66 days.

Nine comrades of Bobby’s were to follow his lead and give their young life’s for Political Status during that dark year in Irish history. Eventually political status was regained only to be sold away in 1998 with the signing of the Belfast Agreement. A treacherous deal.

Bobby Sands in death as he did in life continues to inspire those who come in contact with his character, his writings, poetry and songs. He remains an inspiration to freedom loving people across the globe. Here today let us vow never to forget the sacrifice of all those who died on Hunger Strike for justice in Ireland, twenty two men in total since 1917.

Before I end here today I want to remind you all, and perhaps there are some here who are not aware, Ireland still has political prisoners but again in a case of history repeating itself they are being criminalised by the British state.

“They have nothing in their entire imperial arsenal to break the spirit of one single Republican Political Prisoner-of-War who refuses to be broken.”

Comrades, friends of Ireland we ask you to stand by Ireland’s revolutionaries, to stand by those dedicated to the creation of a New Ireland, an Éire Nua – this will only be achieved when we drive into dust the capitalist infrastructure which has left poor and destitute many working communities throughout the entire nation. We must foresee the death of imperialism, anything less and your children will curse your inaction.”

Victory to the Republican Movement.