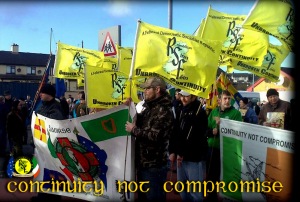 Republican Sinn Féin and other republican and socialist activists from throughout Ireland gathered in Derry on February 2nd in solidarity with the families of those murdered on Bloody Sunday 1972. Their quest for Justice continues.

Photograph’s can be seen > here

A video of the speakers will be uploaded soon and can be seen on the R.S.F. Media Channel > here

List of those murdered on Bloody Sunday. Nobody has been held to account for the murders of these innocent.

* John Johnson was shot twice on 30 January 1972 and died on 16 June 1972. His family is convinced that he died prematurely and that his death was due to the injuries received and trauma he underwent on ‘Bloody Sunday’.