New Year Statement from the Leadership of Republican Sinn Féin 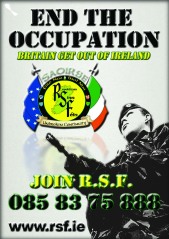 New Year Statement from the Leadership of Republican Sinn Féin

Republican Sinn Féin extends fraternal New Year greetings and solidarity to our friends, supporters and comrades both at home and abroad. The coming year will be one of ongoing struggle for working-class people in Ireland and across the world. Ireland’s struggle for national independence is not an isolated one but is part of the wider fight against imperialism across the globe. It is this realisation which must inform our thinking and also gives us heart as we once more take up the banner of Irish Republicanism in 2014.

The recent Haass talks were served up by the British and Stormont political establishments as a distraction from the real issues. No amount of political window -dressing can disguise the fact that the Six-County State is an abnormal and undemocratic political entity. The right to political protest is denied to those who refuse to conform to the parameters of the Stormont Agreement.

For the Stormont regime and its British masters civil rights only apply to those who accept the writ of the British Crown in Ireland. The age-old methods of repression continue to be used, such as internment without trial and internment by remand. Special laws and special prisons are used to silence and contain any voices that advocate any alternative to the failed partionist system.

We extend our greetings to the Republican prisoners in Maghaberry who refuse to allow themselves or their struggle to be criminalised and pledge them our continued support. We call for the unconditional release of Martin Corey who in now entering his fourth year as a political hostage, imprisoned without trial or sight of any evidence against him. We believe that ÉIRE NUA provides the best means of breaking the logjam and creating the basis for a just and lasting peace. It is a political programme that is based on true All-Ireland democracy empowering people in a real way in contrast to the undemocratic sectarian carve-up that is Stormont.

In the 26 Counties the economic and social struggle must be an integral part of the drive for a New Ireland. The policies of the Leinster House regime are designed to force our young people to emigrate and to disenfranchise those who remain at home. The social infrastructure of the 26-County State has been sacrificed in order to prop up the neo-liberal economic system of the EU.

As we approach the centenary of the 1916 Rising the only fitting way to commemorate that historic event is to complete its task by re-establishing the All-Ireland Republic as set out in the 1916 Proclamation. In this decade of centenary our history has become part of the battle-ground as the 26-County Administration attempts to politically neutralise the coming generation by denying them access to the inspiration of their revolutionary history.

Already we have calls for the GAA to commemorate World War One as part of an attempt to dilute the meaning and message of 1916 in a torrent of imperialist nostalgia. There is no equivalence between the 1916 Rising and the First World War. The 1916 Rising was part of a democratic revolution to secure national liberation for the Irish people and to establish the ownership of Ireland for the people of Ireland. Its radical and progressive programme set out in the Proclamation of Easter Week still resonates with people in the Ireland of the 21st Century. World War One on the other hand was a war of imperialist conquest, fought out between the imperial powers of Europe, turning the continent of Europe into a charnel-house for the working-class. Its aims were neither democratic nor progressive but merely about consolidating the grip of the big imperial powers. James Connolly was very clear about the nature of that war: “Would it not be better for all capable of bearing arms to resolve to fight, and if need be to die, for Freedom here at home rather than be slaughtered for the benefit of kings and capitalists abroad?”

This year we will commemorate the centenary of the founding of Cumann na mBan and the landing of arms in Howth and Kilcoole as part of the build-up to 2016. We are engaged in a fight not only against political and economic imperialism but also a cultural imperialism which seeks to rob us of the very markers of a separate identity such as our language and history.

In the forthcoming 26-County Local Elections our candidates will be standing on a revolutionary and truly democratic programme. Due to the undemocratic political test oath Sinn Féin have been precluded from contesting local elections in the Six Counties. This effectively disenfranchises those who wish to support candidates standing on a truly Irish Republican manifesto.

We in Republican Sinn Féin stand unequivocally for the re-establishment of the All-Ireland Republic of Easter Week. We reject any dilution of Ireland’s right to national independence. In our political, social and economic policies ÉIRE NUA and SAOL NUA we have a programme that realises the dreams of the revolutionary generation of a century ago and importantly meets the needs of the Ireland of the 21st Century.